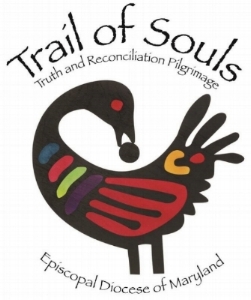 We honor and respect these many persons of color whose names appear herein. Here we include records of life events of persons of color that took place within St. Margaret’s church. Listing these persons by name allows us to tell a more complete story of St. Margaret’s, especially it’s first 172 years under slavery and it’s following three-quarters of a century living with the inequalities of racial separation. To read the list of names and services, go to our Baptisms, Marriages and Burials page.

We are now free to tell a story that is neither African-American history nor St. Margaret’s Church history. It is OUR history. Our history that has stepped out of unseen hand-written pages and into this digital record.

In 2013, the Right Reverend Eugene Sutton, bishop of the Diocese of Maryland, invited St. Margaret’s Church, Westminster Parish, Annapolis to become one site on the diocesan-wide 2014 TRAIL OF SOULS: A Pilgrimage Toward Truth & Reconciliation.

In addition to teaching, writing, preparing and presenting a video production, St. Margaret’s Church placed five handcrafted historical markers along its own pilgrimage route to commemorate 172 years (1692-1864) of living with slavery, first in the proprietary colony and later the state of Maryland.

Historical Marker I recalled colored baptisms, weddings, funerals/burials in the 1800s conducted by its clergy for both enslaved and free persons of African descent.

We would write in the 2014 TRAIL OF SOULS report . . . Historical Marker I is a reminder that St. Margaret’s clergy conducted many baptisms, marriages, and funerals/burials for enslaved and free persons of African descent for more than 40 years during the 1800s.

We did not know that there were many more services that would follow, even with the rise of Asbury Broadneck AME (today, Asbury Broadneck United Methodist Church) by 1852 and the end of chattel slavery in 1864.

In the 2014 TRAIL OF SOULS report we reported

No records of enslaved persons appear in the histories of St. Margaret’s Church until the 1800s.

It is nearly impossible to report what may have occurred before 1827. This parish lost most records in the 1803 fire that destroyed the second church and left St. Margaret’s without a church building until 1827 ca.

The parochial report for 1825 apparently includes five colored baptisms (the first such reporting) and the accuracy of this report is highly questionable. The parish reported no other baptisms, marriages, and confirmations in 1825 — a year when the parish had no rector and no church building.

In 1832, responding to the 1831 Nat Turner Rebellion, Maryland barred persons of African descent from holding religious meetings unless a white minister was present.

In 1844, according to the Rev. Orlando Hutton, rector, St. Margaret’s Church clergy performed 16 colored baptisms, and five colored marriages. There is no information about where these services were held.

Extending sacraments and pastoral care to persons of African descent would continue in 1846 when the Rev. Samuel Ridout, M.D. became rector, serving as rector until the close of 1860. According to annual parochial reports submitted by Dr. Ridout to the (Episcopal) Diocese of Maryland, he conducted these services at unknown locations (likely private services and not inside the church building)

St. Margaret’s register shows Dr. Ridout conducted services for persons of African descent who were not members of St. Margaret’s from 1870 until just before his death in 1885, including two baptisms at the then Asbury Broadneck African Methodist Episcopal Church and two weddings at his Whitehall home.

Our intent within the 2014 TRAIL OF SOULS report was to provide an account of baptisms, marriages, and burials conducted by St. Margaret’s Church clergymen for unnamed persons described in the annual parochial reports as colored, dating from the first recorded services in 1825 through the end of chattel slavery November 1, 1864.

We included the period beyond 1864 through the death of the Rev. Samuel Ridout, M.D. because we could. The sources we found for the data from 1870 through 1874 led us to other sources, and from those sources we have been able to include with this report more than 260 records with names, dates, and families for services provided for persons of color by clergyman at St. Margaret’s Church.

We share these data without comment, looking to others to explain the history. We welcome discussions, corrections, astonishment. We have looked at the data and have tried to visualize each individual.

We wonder what St. Margaret’s Church could have become if persons of color had become full participating members starting in the 1800s. If all persons could walk in the front door and become welcomed, encouraged to become members, establishing a diverse worshipping community that could not even be imagined 150 years ago.

There is grave sadness at this opportunity lost to the past and an urgency that the future find this parish moving beyond a welcoming parish to an inviting parish. Persons who were not members, who could not become members, who did not look like members of the past, who were uninvited, found their way to St. Margaret’s Church. They and their descendants are now elsewhere. Who will come our way when we become and remain an inviting parish?
Prepared by St. Margaret’s Church History & Archives Project October 2016
St. Margaret’s Church | 1601 Pleasant Plains Road | Annapolis | MD | 21409 info@st-margarets.org | www.st-margarets.org | (410) 974-0200